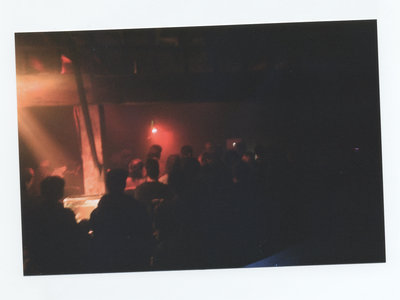 Eli Keszler is a New York based artist, composer and percussionist. Keszler’s installations, music and visual work have appeared at Lincoln Center, MIT List Center, 67 Ludlow, Victoria & Albert Museum, Sculpture Center, The Kitchen, South London Gallery, Hessel Museum, Carpenter Center for the Visual Arts, Luma-Foundation, Centraal Museum in Utrecht, Barbican-St. Lukes, LAX Art, and Greater New York at MoMa PS1. His work has been featured in Frieze, Bomb Magazine, The New York Times, Wire Magazine, The Washington Post, Gramophone, Modern Drummer and Modern Painters among others. He has released solo records for Empty Editions, Esp-Disk', PAN and REL records. As a composer Keszler has received commissions from the Icelandic Symphony Orchestra, ICE Ensemble, Brooklyn String Orchestra and So Percussion. Keszler is a graduate of the New England Conservatory of Music and was a 2016 New York Foundations for the Arts fellow.
soundcloud.com/elikeszler

Scott Johnson Gailey lives and works in Vancouver as a composer, musician, producer and artist. He is a member of the groups You’re Me (with Yu Su) and Juniper Systems, who have released albums with the labels 1080p and Isla. As a collaborator with Julian Hou, he performed as part of Nexus Line, commissioned by 221A and presented at the Vancouver Art Gallery for ReFuse, 2017. Other recent performances have been hosted by New Forms Festival, Vancouver; Corridor Festival, Seattle and Mutek, Montreal.
soundcloud.com/scottg_ailey

Stefan Maier (b. 1990) is an artist from Vancouver, Canada, working in sound, installation, and improvisation. As a composer he has been commissioned by Vertixe Sonora (Santiago de Compostela), Fonema Consort (Chicago), Nouvelle Ensemble Moderne (Montréal), and Talea Ensemble (New York). As a performer his work has been featured by Snyk (Copenhagen), AHEAD Festival (Vilnius), Kunsthal Aarhus, Kunstlerhaus Dortmund, Forecast Festival (Berlin), and Ultima (Oslo). He has exhibited at Haus der Kulturen der Welt (Berlin), 67 Ludlow (New York), and the Inter Arts Centre (Malmö). In 2016, his concert-installation “Music for Organs” was recognized as an outstanding composition of the year by the Danish Arts Council. He received a Mayor's Art Award from the City of Vancouver in 2017.
soundcloud.com/stefanemaier

Deep Blue's cumulative mission is to provide studios for artists, while simultaneously offering a diverse range of public programming within the disciplines of Sound, Music, and the Sonic Arts.

Deep Blue would like to acknowledge that it is located on the unceded territory of the Coast Salish Peoples, including the territories of
the Musqueam, Squamish, and Tsleil- Waututh Nations. ... more